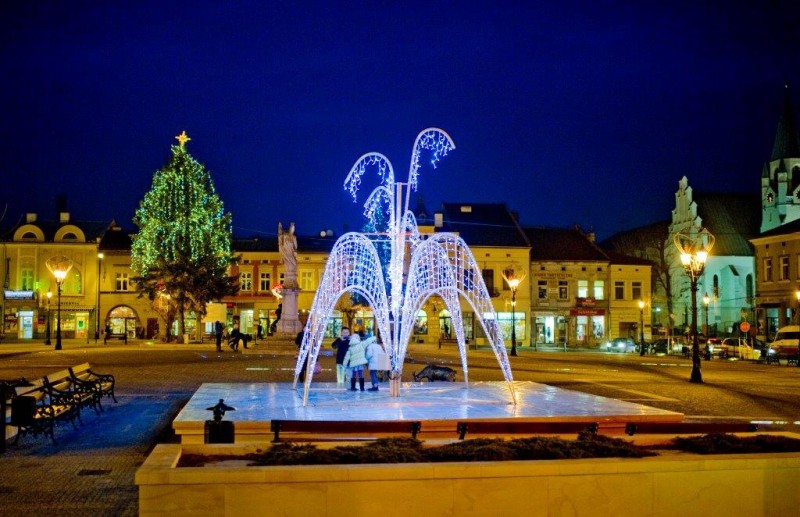 A variety of interesting tenement houses was erected around the market square after the great fire of 1904. These buildings are kept in Neo-renaissance style - both eclectic and Art Nouveau. They hav intriguing oriels, portals and wrought balconies combined with fascinating flraland figural ornamentation.

- The former town hall in Brzesko

The town hall of Brzesko was erected between 1909 and 1910 by a construction company owned by W. Apter and located in Cracow, on the basis of the design prepared by Gabriel Niewiadomski – an architect from Cracow. This building constituting one of the most important municipal historical monuments was constructed with the use of bricks containing the addition of stone. The southern elevation of this building is decorated with mosaic presenting the Brzesko coat-of-arms – namely the Griffon.

- Church under the invocation St. James Apostle and Martyr

The first wooden temple in Brzesko was constructed probably in 1385 thanks to the queen Jadwiga d’Anjou. The erection of the currently existing brick church was initiated in 1529 by a bricklayer named Jan Turobińczyk of Koszyce. The church was consecrated in 1544. It was destroyed on multiple occasions by foreign troops and fires. The church was damaged by yet another fire in 1904. Consequently it was reconstructed in Neo-gothic style, most probably by an architect called Roman Bandurski of Cracow. The interior of the old church is decorated with Neo-gothic altars and a pulpit originating from the beginning of the 20th century, performed by Ferdynand Stuflesser of St. Ulrich- Gröden in Tirol and also with several paintings dating back to the period between the 18th and the 20th centuriesby authors such as Julian Krupski and Adolf Hyła.

- The Statue of St. Florian

In the centre of the market square you can find a baroque statue erected in 1731 and founded by the citizens of Brzesko after another fire of the town.

- The statue of Jan Albin Goetz

In Browarna street in front of the entrance to Okocim Brewery the statue of Baron Jan Albin Goetz (1864-1931),owner of the brewery and the nearby palace, is located.

- The palace of the Goetzs of Okocim

The palace erected between 1898 and 1900 by Jan Albin Goetz Okocimski (1864-1931), king of beer, entrepreneur, landowner, politician, philanthropist and art patron, who possessed the title of baron from 1909. The family seat of the Goetzs was erected according to the plans prepared by a then extremely well-known Vienna-based company owned by Ferdinand Fellner and Herman Helmer. In the period between 1908 and 1909 the palace was extended by the east wing with a winter garden and a greenhouse following the design prepared by Professor Leopold Simona of Vienna Polytechnics. At present the palace with the park are administered by Bochnia Salt Mine Sanatorium Ltd.

The buildings of Okocim Brewery rank among the most amazing industrial objects in Małopolskie region. This production plant, famous for many years for excellent beer, had been initially constructed in 1845 and subsequently gradually extended until the 1930s. Among multiple well preserved brewery buildings a few truly stand out, namely: the so called Neo-renaissance “old palace” (1845-1850), the old malt plant (1875), the barley granary (1884) or the brew-house (1845). For several years Okocim Brewery PLC has been a member of the Danish brewery group Carlsberg Okocim PLC.

Located in the vicinity of the brewery in Wesoła street the summer theatre was erected in 1902at the initiative of Jan Albin Goetz in the architectural style typical of the area of Zakopane, so popular at that time. The building, designed by Eugeniusz Wesołowski, used to constitute one of the most beautiful structures in Polish Galicia. Currently the building houses a restaurant called Pawilon Okocim.

Located between Kościuszki and Ogrodowa streets, the cemetery was established in 1801. The cemetery holds the remains of numerous well-known citizens of Brzesko such as poet Stanisława Sosnowska, the mother of Ludwik Solski or count Artur Sumiński, the owner of Słotwina.

Located in Czarnowiejska street, designed by an Austrian architect Lt. Robert Motke. This cemetery is the burial place for the soldiers of the I World War I killed in battles or deceased in field hospitals at on the turn of the years 1914 and 1915.

The only preserved necropolis of this religion in the area of Brzesko is located in Czarnowiejska street. The cemetery was founded approximately in 1824. Famous rabbis such as Arie Leibusz (dec.1846) or Towi Lipschitz (dec.1912) were buried here. The cemetery also holds the grave of over two hundred Jewish people murdered by the Nazis on the 18th of June 1942.

Located at the foot of Bocheniec Hill (400 meters above the sea level), once a royal settlement, Jadowniki was first mentioned as early as in 1195.

- The fortified settlement on Bocheniec

On the hill the remains of a large fortified settlement originating from between the 9th and the 10th century are visible. The settlement was connected with the state of Wiślanie Tribe. It was discovered in 1905 and it constitutes one of the most important defensive structures of the tribal period in Poland.

Below the settlement there is a small church overlooking the area. The church dates back to the 1650s and was founded by Władysław Lubowiecki, the land judge of Cracow and the tenant of Jadowniki. The building is kept in a Gothic tradition. The furnishings date back mostly to the 17th and 18th centurie.

A village that used to belong to the Melsztyńscy and subsequently to the Czerny families.

ANeo-gothic parish church erected between 1884 and 1885 and founded by Jan Ewangelista Goetz, – the founder of the brewery, on the basis of the design prepared by an architect Max Schwed of Vienna. This temple is a single nave building with a pair of chapels at the sides in the form of a transept and the presbytery closed at three sides. The church also has a tower topped with a brick spire. In the chapel we may find epitaphs of Goetz family members for example of Jan Ewangelista Goetz, which was performed by a Cracow sculptor Zygmunt Langman according to the design by famous architect Tomasz Pryliński and the one of Jan Albin performed by Antoni Madeyski. Below the chapel there is a crypt containing the coffins of the Goetz family of Okocim.

- The school building in Okocim

Next to the church we may encounter the eclectic school building dating back to 1895 founded by Jan Albin Goetz and designed by the renowned architect Teodor Talowski.

A picturesque village that used to belong to comes Spycimir Leliwita - the predecessor of Tarnowski and Melsztyńscy families. The parish church under the invocation of Saint Bartholomew located in the village is a brick, Gothic structure erected approximately in the 1550s - yet today the features typical of this architectural style have become faded.

Next to the church a free standing belfry overlooks the area. This building was erected probably in the 17th century. The tower possesses post and beam construction with the walls narrowing towards the top. It is crowned with an overhang ice breaking pier covered with a pyramidal, shingle roof.

Szczepanów – the place of birth of St. Stanislaus, the bishop of Cracow, who is supposed to have died of the hand of king Bolesław Śmiały and the primate of Poland Krzysztof Antoni Szembek. Until the 15th century the village was owned by Turzynici, later by Melsztyńscy, Czerny and Lubomirscy families.

- Gothic church under the invocation of St. Madeline

Founded by Jan Długosz among others, who was an outstanding historian, chronicler, Cracovian canon and the parson of Szczepanów. The church was erected by a famous Cracovian brick-layer Marcin Proszko. Inside the church we may encounter well preserved gothic masonry including the plaque and portals. From the south it is adjoined by a large, new Neo-gothic church erected according to the plan by Jan Sas Zubrzycki.

- The cemetery church under the invocation of St. Stanislaus

In the cemetery of Szczepanów one of Neoclassical churches so sparse in this area, was erected. This temple was constructed by Stanisław Lubomirski in 1781, seemingly in the place where a wooden chapel of 1511, standing on the foundations of the family house of St. Stanislaus used to be located. Perhaps the author of this interesting architectural creation was Stanisław Kostaka Potocki, an amateur architect, or Christian Piotr Angier of Italian origin.

This is a brick structure consisting of a single-space nave and a narrower presbytery with sacristy. Inside there are late Baroque altars, paintings from the 18th- 19th century and a classical organ.

A Neo-gothic chapel from 1861 commemorating the place where the martyr and saint-to be was supposed to be born under an oak tree. In the vicinity of the chapel, within the wall surrounding this building, there is a well, connected with a local cult, equipped with a wooden casing and a statue of St. Stanislaus standing on a stone column, dating back to the 17th century.

A village located west of Brzesko, once the possesion of Melsztyńscy family.

- Church under the invocation of Our Lady of the Assumption

A Gothic parish church of 1436 founded by Spytko of Melsztyn. Recently the remains of polychrome from the 15th century have been discovered inside the church.

Here you may find superb examples of wooden housing of the so called Cracovian type dating back to the turn of the 19th and the 20th centuries.

A village founded in the 12th century. It has a beautiful church under the invocation of Our Lady of Perpetual Help erected between 1947-48 according to the design of Adolf Szyszko-Bohusz.

The village was probably founded in the 16th century. The forest hides a small military cemetery from the times of the World War I.

A village dating back to the 15th century, previously in the possession of the Cracovian bishops. A brick mansion from the end of the 19th century is located in this village.